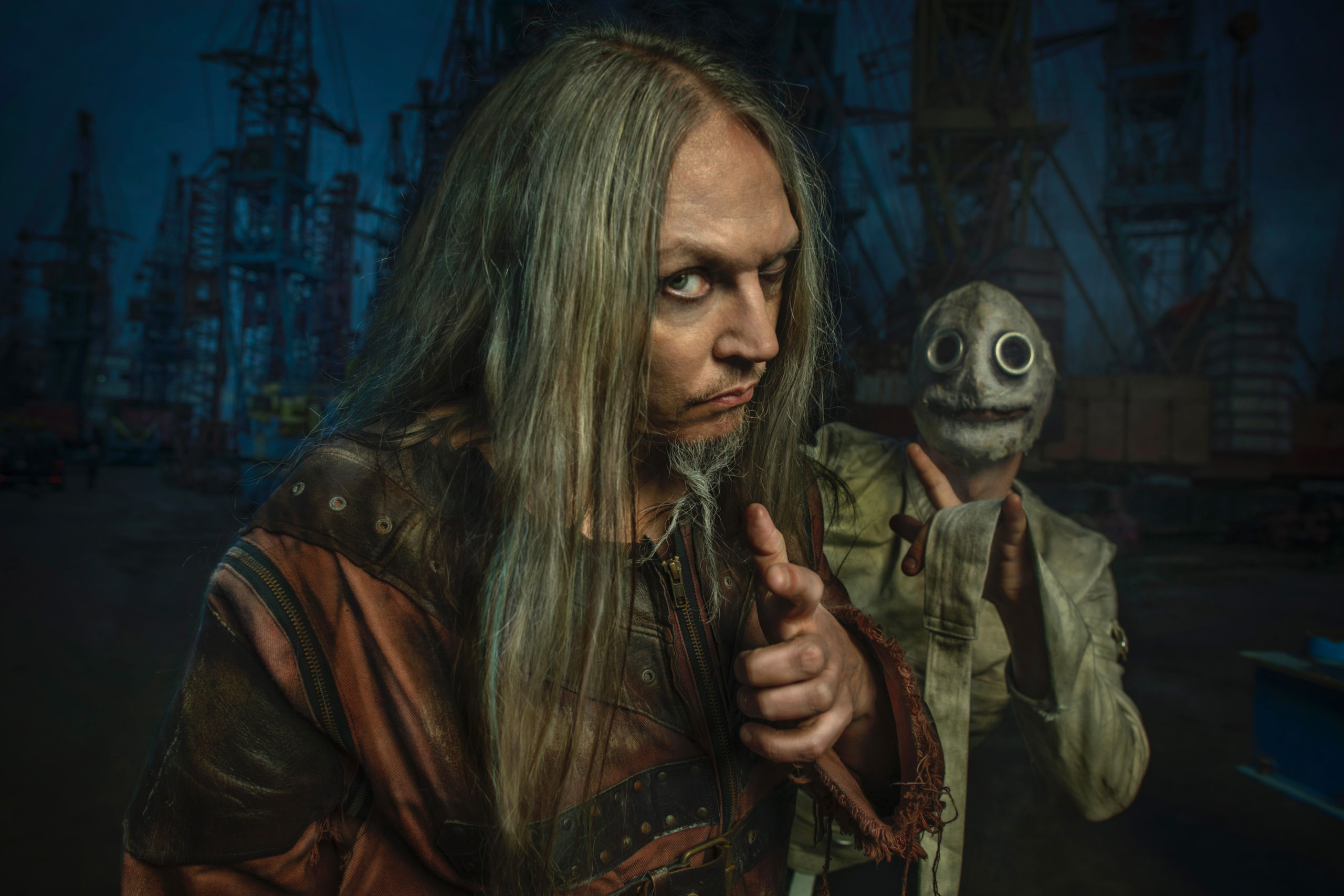 It took a pandemic of worldwide proportions, but Peter Tägtgren has his ducks in a row, as the old expression goes.

One of the more sought after and tireless producers in the metal space, who just so happens to juggle front-man duties for melodic death metal luminaries Hypocrisy with his industrial (party?) metal project PAIN (not to mention past stints in The Abyss, Lindemann, Lock Up and Bloodbath), it goes without saying that Tägtgren is one of the true iron-men of heavy metal.

The legendary Swede caught up with Metal Injection to dive into new PAIN singles, collaborating with his son Sebastian, his love and potential burnout of production, the upcoming Hypocrisy record and much more!

On Burnout and Finding Motivation

Well, to be honest, I was burned out since 2015. I just got done doing a new PAIN album and then it was Lindemann and then tours. Hypocrisy tours, PAIN tours, Lindemann, and new Hypocrisy again. So I was kind of happy just to lay on the couch for a half a year in March 2020, because I was really fucking burned out. So for me it was a good time to take a half a year off. And then I cleaned up everything that I had in the pipeline to do that always had to be pushed aside.

Like, for instance, the new Hypocrisy album. As soon as I got my energy back and shit I finished that off in a heartbeat. I feel sorry for bands who really need to go out and do this and crew and everything. There were a lot of people in our business, not only bands, that suffered.

On the Origins of PAIN

It actually started when we were doing the Abducted album, I would say in 96 with Hypocrisy. I had started writing a lot of weird stuff. I don't know why, I just felt like I wanted to try to see if I can write anything else than brutal metal. So that's another reason why "Slippin' Away" is on Abducted at the end there. I was actually writing it to put it in my own archive, so to say. But the other guys really liked it. So it ended up on an Abducted.

And I'm a really big fan of Pink Floyd, so I wanted to try to write a couple of Pink Floyd songs. So that's how it really started. And after that and after we're done with Abducted, then I started writing different kinds of stuff just to see what I could do. It was more heavy metal stuff and that's how the first album came out. And then the second album, I just wanted really to get into the producer aspect, but I didn't have any bands. So I had to make up my own music so I could start producing with samplers and computers and stuff like that. So that's really how PAIN started. And now it is what it is.

Yeah, it got stressful as hell. Just by thinking about it, it made me really burned out by what kind of schedule I had. I had to tell the guys in Sabaton, the biggest band that I produced, like sorry guys, I can't do it. I'm totally fucked. I don't want to waste your time or your money by sitting and not being 100 percent into anything. So that's why I had to tell the guys I'm sorry, I can't do it. It's impossible. My body and my brain doesn't work anymore. So it was really frustrating for me as well to see one of the biggest bands, to let them go. These are the kind of things that really fucking freak me out. So nowadays I don't have to do anything. I just do what I feel like, to be honest.

On PAIN's Cover of 'Gimmie Shelter'

I recorded that song like five years ago, I would say just because I wanted to do some blues stuff and take out my Telecaster. There's a lot of bluesy shit on that original. My version was just like the original. I just wanted to document the song. I mean, these songs that I do as covers, they always mean something from the past or present or whatever.

With "Gimmie Shelter," it's about the Cold War, about Vietnam and shit like that. Mick Jagger thought he was going to die in World War III in the 60s, so he was freaking out. And I think it goes the same shit the last year and a half, you know?

All the riots and all the madness. People are doing revolution in weird kinds of ways. You know, it kind of fits. It's not about the Cold War anymore. It's just anything from COVID to standing up against the governments or whatever. And I just wanted to get that in. I picked it up because I realized that would just be for me to have the original song just for me to sit and masturbate to (laughs). So I felt like this is a good time to send this song out because it's just as important today as it was 52 years ago. I just picked it up and gave it the PAIN kind of feeling that I thought could work for the song.

On Collaborating with Sebastian Tägtgren

When he got to a normal age actually, I wanted to wait a long time and I didn't want to pressure him into anything. So yeah, the first album he put drums on was actually on Coming Home in 2016. I think he was eighteen then and then I felt like OK, he can actually now start going out with me on tour and shit. So he did like, I don't know how many tours with PAIN, so he's full blown a killer fucking drummer.

In 2013, me and him co-wrote a song together on a Hypocrisy album. I think he was like 15 or something. I don't know. "Soldier of Fortune" on the last album me and him wrote together and on the new Hypocrisy, he wrote a whole song by himself. So the guy's got talent, that's for sure.

On PAIN Single 'Party in My Head'

When I wrote this song and we started thinking about, OK, what can we do? What kind of fun thing could we do with this? When it comes to "Gimmie Shelter" you mainly just go out on the news and look for chaos from the past all over the world, not only one country or two countries.

But with this one a friend of ours had a script idea. And then he went to another person with a script idea and then he went to the director, and he increased the story. And so it was going back and forth between three people, I think, until I thought wow, this is cool and I hope we can really make it. Anything on paper you can write down, but to actually make it that, that was my most concern. But I think it turned out really great.

On Highlights of Producing
Advertisement. Scroll to continue reading.

I think in the 2000s I was more home to go out (touring) and then I kind of went back to record and produce a couple of albums. And then I felt, nah, I think I really need to go out more. So from the 90s and mid 2000s there were a lot of productions. I didn't even have time to promote my own bands because I was booked in the studio.

When you have to do things then it feels like it loses the charm of whatever you do. So I just started taking care of my three bands at the time I had and just concentrated on that and not really taking in any productions at all. But I mean nowadays, sure, I can do a production here and there per year, if it's something interesting.

When I first saw Dimmu Borgir I was like, OK, what the hell is this? I only heard like a mini album and it was Nuclear Blast who asked me if I could help. You start in the studio and it's like this is not too bad. And all of a sudden Enthrone Darkness Triumphant was done and people just freaked out on it. They didn't understand it. I didn't understand it either. But it was like, wow, that's great. Things like that, you know?

Definitely not too far (for a PAIN record) because I mean, I'm done with Hypocrisy. I'm waiting for the schedule from Nuclear Blast. And I know there will be some (Hypocrisy) music out soon and the album will be out this year as well. So it makes me relax. All photos are done, two videos are done. For me it feels like, OK, now I can wait and let other people work on it because I've been working on it hard and now I can put it aside.

Plus I have another album on its way out, a new project which will be announced a little bit later. That album is done as well. So I did a lot of stuff over the last year, just tying the knots together all left and right when I had everywhere spread out, so now I can just sit down and start writing songs

They will get what they want I think, put it that way. It definitely sounds like Hypocrisy, I would say. And not in a boring way to say like yeah, we're just repeating ourselves. That's not really true. It's new songs. It's really hard.

I mean, I have hardly played it to anybody, so I don't know what to say. Well, whoever heard it, they say oh, this sounds really like Hypocrisy and really good songs, you know? So I don't know. We have to wait and see what everybody thinks. I'm in a bubble, so I can't really say what it is.

I think you have the whole what we are in Hypocrisy. We don't really want to change ourselves to nu-metal or try to be commercial or anything like that. I guess we do what we do.

On Returning to the Stage

Yes, I do (want to return to the stage), but I also have this kind of I'm getting nervous like, shit do I remember anything? I never touch the guitar unless I have to. When I write music, I write it out of my head and then I put it into notes on the guitar or whatever. So I haven't really been playing guitar for a year I would say.

When I write, I play it, of course, put it on the track and that's about it. You need to go back to the routine. But I think it's like a bicycle. When you start playing one song that you played for five years or twenty five years, it just becomes autopilot, and then you can relax and enjoy it.

In this article: hypocrisy, interviews, Pain