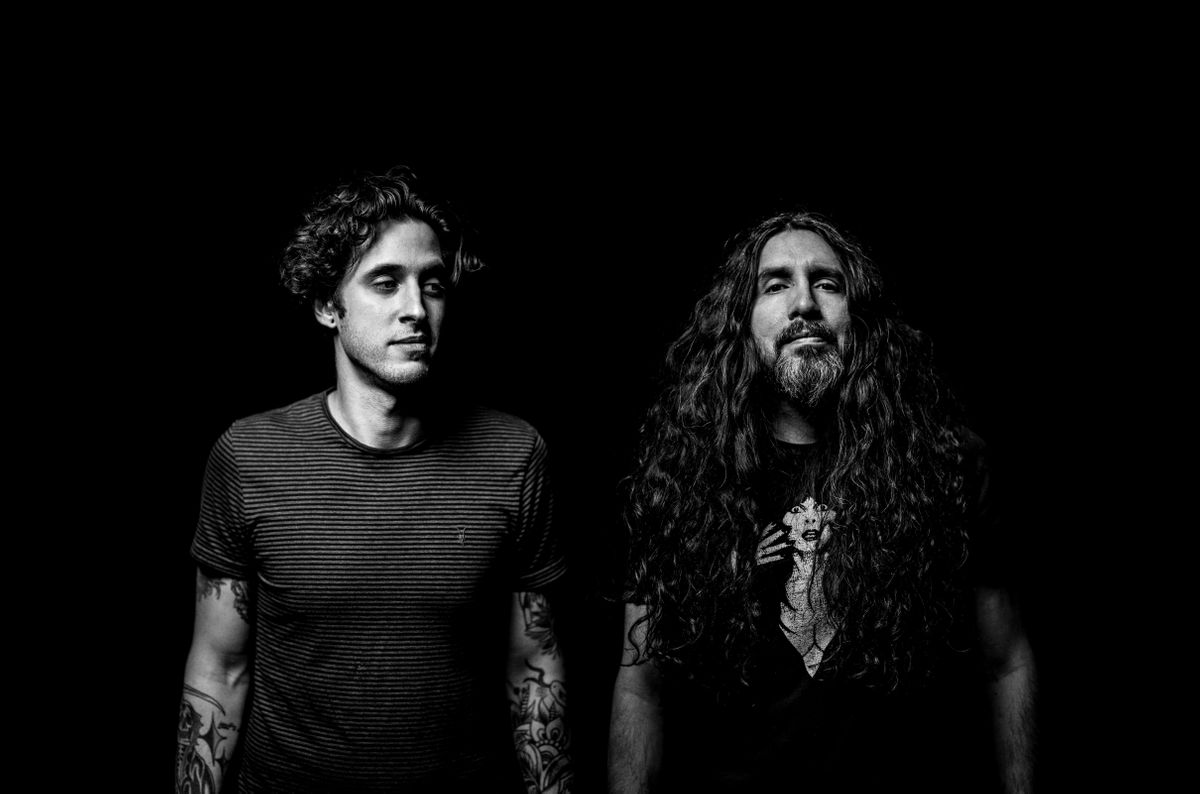 How did Moon Destroys come together?

Evan Diprima:  Juan (Montoya) and I had a band a while back in Atlanta called Stallone. It was this raging instrumental band. About a month after I had left Royal Thunder in 2018, I hit Juan up and I was like, dude, let's get Stallone back together.

So I Juan flew up to Atlanta from Miami and we got a rehearsal room for three days where we ended up playing for something like seventy hours straight.

It was initially going to be all new Stallone material but with the way everything was sounding, we thought we should get some vocals on this stuff.

So Juan said he'd go ahead and hit up a few of his buddies to do some vocals.  Those guys turned out to be Troy (Sanders – Mastodon) and Paul (Masvidal – Cynic).

With this new kind of vision we also got to thinking we should change the name of the band but it took us a long time to do that, something like a year.

So that's kind of how it all happened.  We thought it was going to just be the two of us working on new Stallone material but things kind of just organically evolved into Moon Destroys.

Was recording the EP in under a week an approach Moon Destroys deliberately took or was that simply a result of how things played out once you started working the new material out in the studio?

Evan Diprima:  We wrote like eight or nine songs in three days.  After that we went directly into the studio for two days and recorded everything we could.

We did everything live with just Juan and I in the room and then we doubled up the guitars and bass after the drums and all of that stuff.

We also got my buddy Bryan (Richie) from The Sword to come in and do some synths on “Stormbringer” and that's the thing right there, Moon Destroys ended up turning into this huge collaboration.

So the vision of Moon Destroys is definitely that of a collective.  Yeah we're only two guys but it's always going to be us just really collaborating with our homeboys.  So imagine something like Daft Punk but with heavy music.

Moon Destroys, like Stallone, initially focused on instrumentals but once the Maiden Voyage recording process began I understand that's when you started to think about bringing in outside voices to lay down vocals on a couple of the EP's tracks.

Juan Montoya: Everything happened so fast. I would use this voice memo feature on my phone to record song ideas on and then I'd just text them to Evan.

Eventually Evan and I got together in person and within the space of just two or three rehearsals we came up with a good portion of the music for us to start working on.

The day after the last rehearsal we went directly into the studio and it was just like this tidal wave of everything happening at once.

When we were done Joey Jones (Producer/Mixer/Engineer) put out this awesome pre-mix  After hearing it Evan and I were both like, man, let's get some people to sing on this.

We were lucky enough to get Troy and Paul to sing on the album and, it's clear from listening to the the songs, they took the EP to another level. 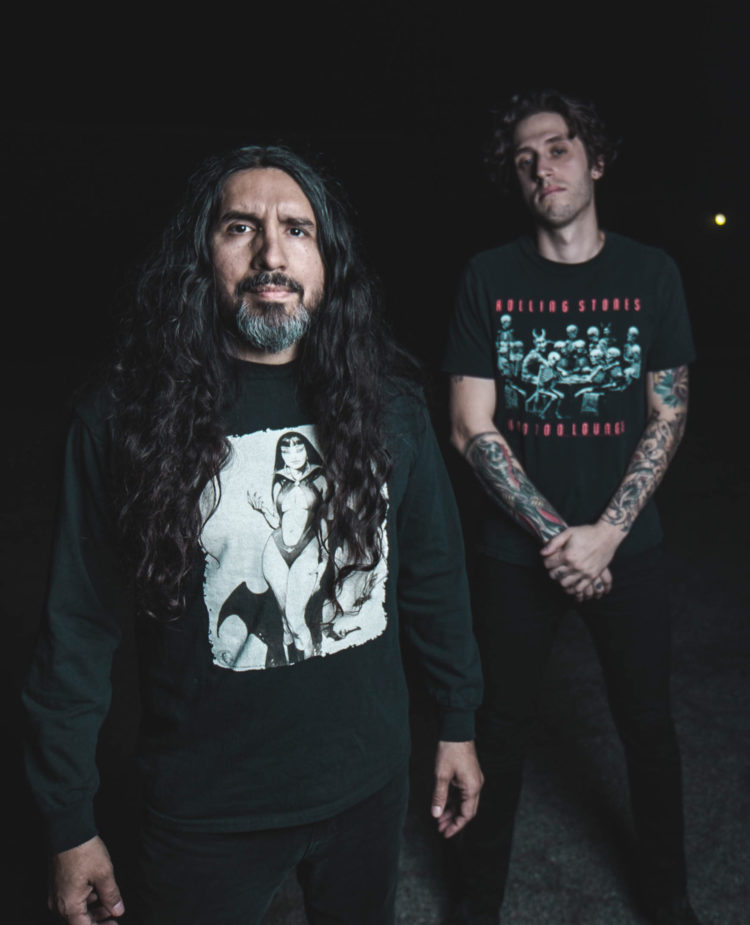 The track “Blue Giant” features Troy Sanders of Mastodon on vocals.  Can you talk a bit about how Troy came into the Moon Destroy's fold and was that relationship bridged at all by the fact Juan had played with Troy's brother Kyle in Monstro and even with Troy a bit in Max Cavalera's, Killer be Killed?

Juan Montoya:  I met Troy and Kyle (Hellyeah) back when I was touring with Torche and we would all end up hanging out after the shows. Kyle is one of my favorite bass players and we ended up forming Monstro back in 2009.

I also did Killer Be Killed with Troy.  I initially came into that project as kind of like a session player but I ended up doing some live dates with Troy and Killer be Killed at the Soundwave

Festival down in Australia.

Troy has such an amazing voice and I thought his deep growl would be perfect for “Blue Giant,” so I ended up sending him the track. Troy then found a studio down in the Tampa area where he laid down the most amazing thing I could have ever imagined, especially those crazy whale sounds.

When I first listened to them I was trying to figure out what instrument he was using to make those insane sounds and then I listened a bit more closely and I was like, “holy shit,” that's Troy's voice. It gave the song a nice ethereal touch.

As an aside real quick, any cool anecdotes regarding Max Cavalera from your time in Killer Be Killed?

Juan Montoya: Preparing for the Soundwave tour Max shows up on the very last day of rehearsals. Eventually he straps on his guitar, Max's tech switches on his amp and he goes up to the mic with the rest of us just hanging back, kind of watching him in awe.

The first thing he does is he lets out this massive roar.  All of just turned to each and we were like, “holy shit!” It definitely pushed some air.

Can you touch on how Paul Masvidal from Cynic became involved with Moon Destroys and perhaps why you thought “Stormbringer” would be a fit for Paul's unique vocal style?

Juan Montoya: I was a fan of Paul's long before I actually met him when Cynic was still playing house parties, that's how long it has been.

Back then they used to be kind of a thrash band but when you'd see them live, they all had super nice hair down to their waists and they would even do this head spinning thing in unison, even the drummer.

Paul and I eventually ending up meeting and getting to know each through mutual friends within the south Florida music scene.

With Paul his music is ferocious but he's also very soft spoken and deep. If you've ever really taken the time to listen to Cynic's lyrics you can easily hear that.

So a while back I was out in California where I was doing an art show and Paul ended up coming out.  We hung out and bonded again so I decided to ask him if he'd mind singing on “Stormbringer.”

He said sure, so we sent the song to him and spoke about maybe doing crazy vocals with tons of delay kind of like early Jane’s Addiction and within two weeks he delivered more than Evan and I could have ever hoped for.  Pure brilliance.

One thing that's unique about Moon Destroys music is that it's not just one thing, it's many things.  Was it your intent from the outset to not have a specific musical direction for Moon Destroys?

Juan Montoya: Our approach with Moon Destroys has been everything goes. Sometimes Evan and I will start something and then it will immediately start mutating into something else. For Moon Destroys we're intent on always taking it to the unknown. 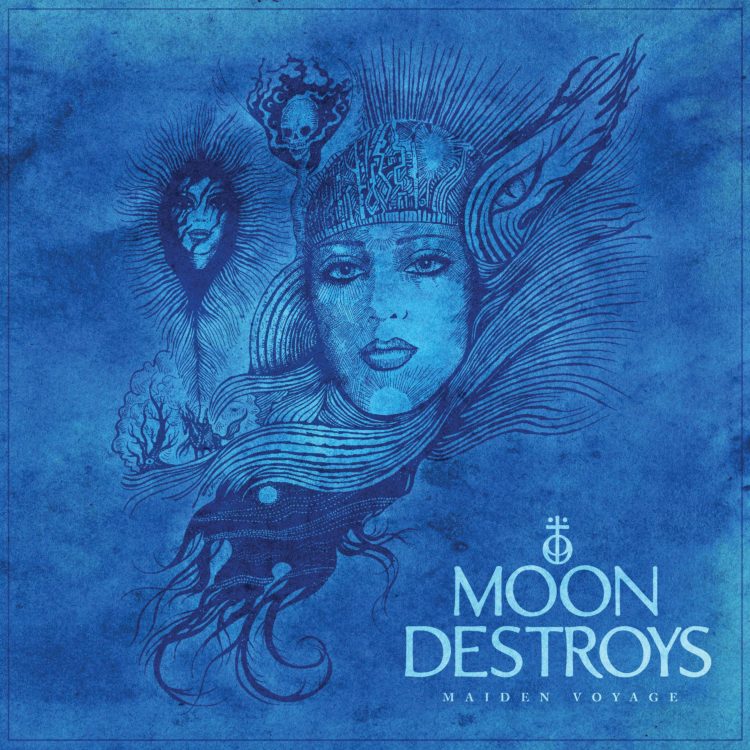 Only five songs appear on Moon Destroys debut EP Maiden Voyage. Will some of the unreleased music from the initial recording sessions see the light of day at some point down the road?

Evan Diprima: There are still more songs we're currently finishing from the recording sessions that will be released later this year or maybe in early 2021.

Initially we were planning on putting out a full length LP but as we got into the process we decided it maybe made more sense to chop it into two EPs so we'd be able to start getting stuff out into the world more quickly.

I honestly feel like the full length album is dying these days anyways.  Maybe with the current crisis it'll come back but I think Moon Destroys is going to focus on shorter releases for the time being.

Dudes like Juan and I that are super fans and musicians, we'll take the time to sit down and listen to a record front to back but I feel like the majority of people just want instant gratification nowadays.

So why not give folks twelve minutes of just ripping their faces off, then release another EP a short time later that's just another ten minutes of ripping. I think taking that kind of approach naturally keeps fans wanting more.

Obviously announcing set in stone tour plans is simply not possible right now but are you at least entertaining the idea of taking Maiden Voyage out on the road for, well, a maiden voyage at some point later this year or in 2021?

Juan Montoya:   We talked to some people about touring and we probably would have already announced something but with everything that's going on right now there's obviously going to be somewhat of a set back.

We will just have to keep it a mystery at this point but yeah, we're definitely planning on taking these songs out and playing them live.

Do you think music can help people cope at all during the type of chaos the world is experiencing currently?

Juan Montoya: This whole thing is stirring up so much emotion.  A lot of people are scared and are handling it with a lot of stress.

I think that can kind of take over your imagination if you let it but if you use all of that nervous energy and pour it into something creative you end up doing something positive with it.

Music is definitely a form of meditation. When you listen to music you discover things.  You not only are listening to what's going on in the music but you're also discovering things about yourself.  How could that be a bad thing, especially now?

This interview was conducted by Robert Forte. 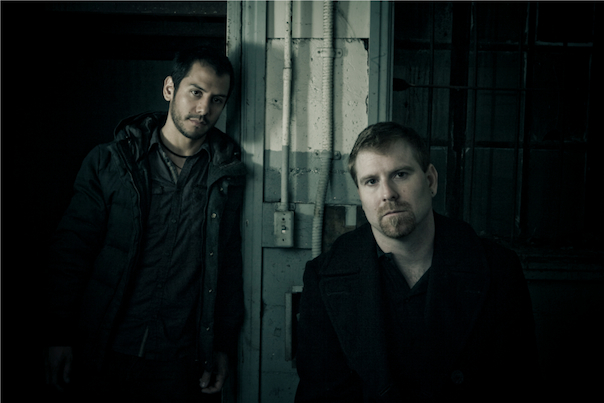 "The Pepper Incident", as it was known. 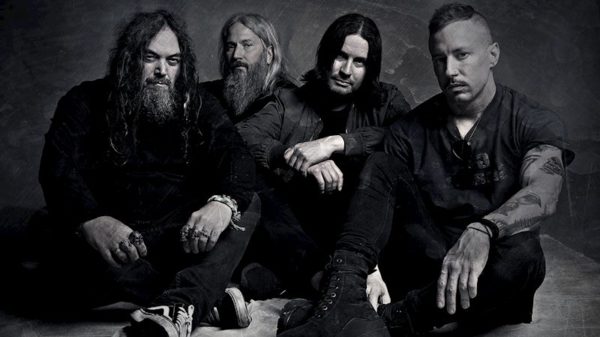 Read an in-depth interview with the band's bassist and vocalist about the new record and why Killer Be Killed shouldn't be called a supergroup. 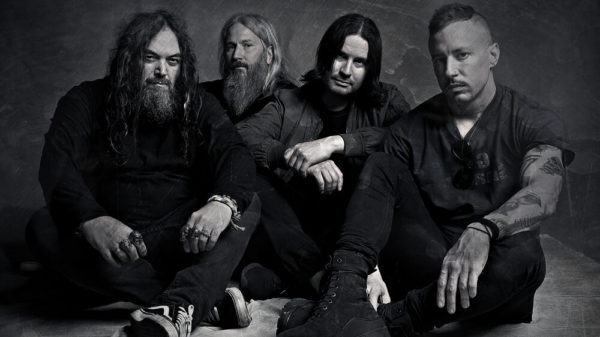 It hits as hard as a truck, as usual.