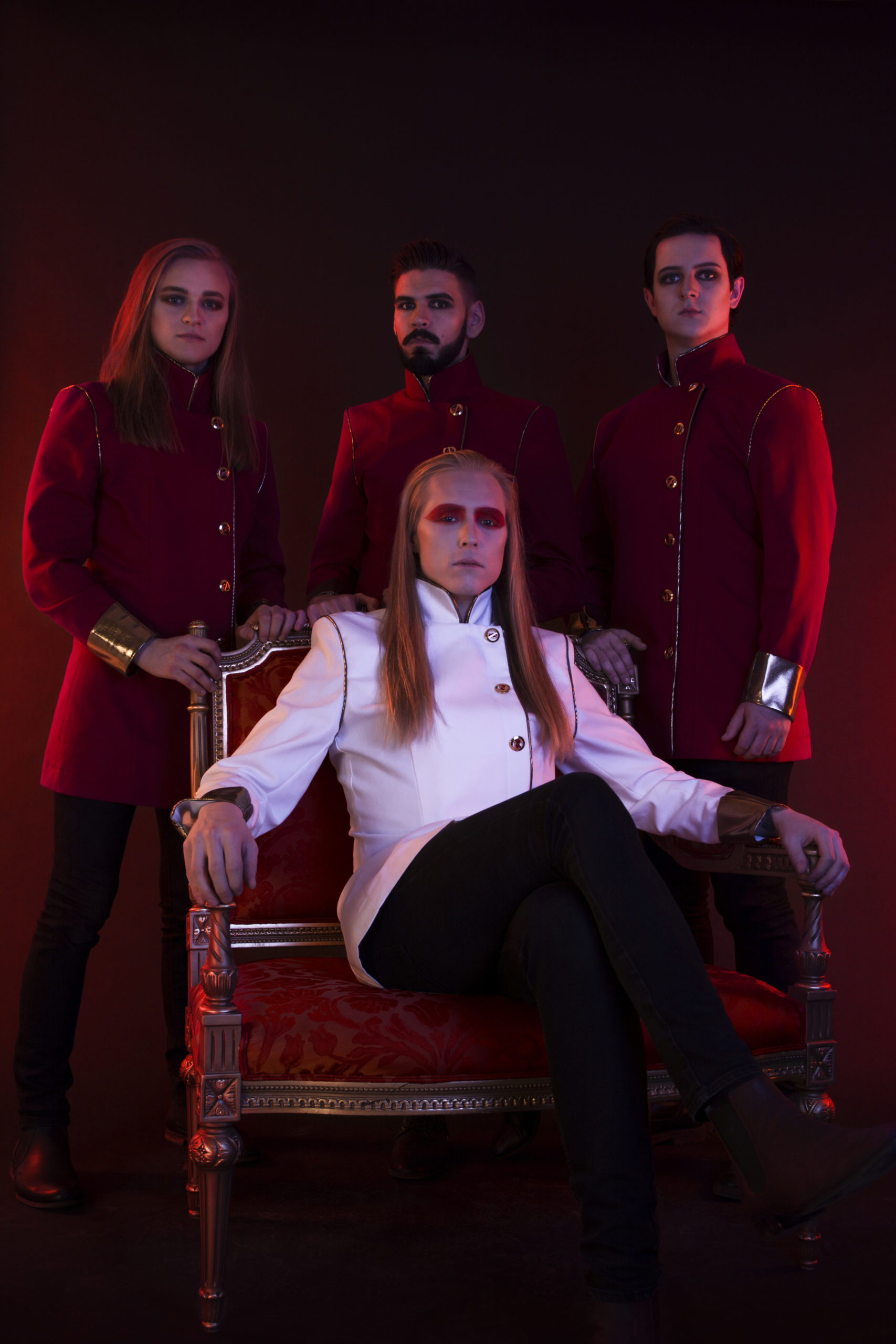 For five years and counting, Sweden's Chronus have pulled no punches with their cinematic blend of high-energy metal. Complete with soaring vocals, intricate riffs and radio-ready hooks and choruses, the four-piece channel everything from Ghost, Avatar and Mastodon, as evident by their latest studio album Idols.

Enigmatic frontman The Baron caught up with Metal Injection for a crash course on all things Chronus, the inspiring bands that defined him, the mentoring they've received from Megadeth and much more!

On Adapting During COVID-19

Everybody is struck by it somehow. We're not in it alone, obviously. So that's a comforting thought. But yeah, for sure, we had lots of touring plans. We were actually supposed to go on tour all over Sweden and some parts of Europe, especially the U.K. with W.A.S.P. Very good venues. So of course we're bummed out to miss those shows.

We've been keeping ourselves busy writing a lot of new music. As you might know the former guitar player for Ghost, Simon Söderberg , he produced Idols. So we're in contact with him again and he's a good friend of ours. We're actually sending ideas back and forth. So we're doing as everybody else is, writing music and putting the energy and the disappointment and everything into the music. It's your hobby and passion, so when you're passionate about writing and you put all those thoughts into the music and just want to get it out to the music.

T25 or here's a lot of bangers for album number three. We might release an EP in between and we're thinking about doing a cover song of an old Chicago song called "25 or 6 to 4". And there's a lot of things that start to spin in your head. There's a lot of ideas for what we want to do, but also take the time to grow and gather strength. So when we hopefully can go out on tour again, we'll be hungrier than ever.

On the Image of Chronus

There's a lot of thought put into how we look and how we represent ourselves. There's actually someone above The Baron who makes all the decisions. He is a secret guy. He told me that he didn't want me to mention him by name. But there's actually another one above the band who controls. He doesn't have the creative perspective in that way. He cannot write music, but he comes with all the ideas and he really took us at a young age and said, hey, you're going to be rock stars. I see potential in you. He's been an important character in the making of what's become (Chronus). We sat down and said, hey, how do you want to present yourself? And then we came up with the clothing and everything. I was given the name The Baron at a pretty early age. We were trained to do this. We were prepared at an early age.

On Walking the Line Between Pop-Structure and Metal

The line is very fine. We've always wanted to pursue like new and different ideas. To be honest, I always listen to more than a single kind of music, pop and metal and even Biggie Smalls from the 90s. There's a lot of cool things happening there. But yes, there are very structured songs with very hookey choruses. It's pretty much inspired from Ghost. (Tobias) is the master of that, to take the best parts and then really just lift them and put the focus on there. We've always wanted to be free in our creative space and create whatever we wanted to. But the songs are definitely polished and in a sense that makes them feel more poppy maybe.

On the Influence of Ghost

I feel that they lit the torch for a lot of other bands. I see it this way. I really love me some good old hookey melodies. And so maybe ten years ago we were forbidden to listen to pop music or ABBA, but ABBA is one of my favorite groups of all time. I think Ghost took that and they hold that torch very high. They didn't show any fear of releasing a, I don't know, super poppy chorus or whatever and they took that and made something really big out of it. I'm very grateful that they did because you can just be creative in a different way because it feels like sometimes the metal community looks at you in a certain way if there is too much ABBA in the chorus or whatever (laughs).

On Relationship with Megadeth

We're forever grateful for all those people. It's such a privilege to get to know them. And when you see how they talk about your band and talk about your baby, which is Cronus, to us that is very moving. I'm super grateful for them taking us under their wings. They've always told us too, we're very happy to do this. Speaking about Dirk Verbeuren, our manager, he always told us don't take anything for granted. We still have to get out there and do the hard work. And of course we're very aware of that. But just to get Dave Ellefson and also Dave Mustaine's blessing is amazing.

We actually played with them back in 2018 and opened for them in Sweden. It's a dream come true, obviously, to look at the stage left and see Dave Ellefson there when you play live. It's an unreal feeling, standing there with Dirk and almost head-banging to one of your riffs, that fuels me forever. And I can live with that for 100 years or more. It means everything because they were in my shoes once and they know how it is. And it's a beautiful thing. But they don't forget where they came from. When they see something that sparks them and they take it and talk positive about that, that is incredible.

Seattle, 89 Metallica (Live Shit: Binge & Purge), that is my Bible when it comes to live music and performance. Metallica is the obvious choice (for an influential band). But we're from the same place as Soilwork. Soilwork played a big part pretty early on, but I would also say Mastodon, obviously Gojira and At The Gates. Even though it's heavier stuff, people might not cross the line to Cronus. Mastodon and Gojira really gave us the spark, and we looked at them and said that's what we want to do.

I mean, there's so much energy and there's so much that we haven't been able to release from ourselves. There's so much energy that we need to infect people with. We just want to get out there and play. The whole band concept comes from wanting to play in front of an audience, so obviously we really hope for this pandemic to be over. Maybe there will be a vaccine or something so we can all go back to playing in front of a crowd. That is something special. We're just psyched to perform. We love playing and we're going to do the best out of that situation.

We were actually shooting some new videos, like play-through videos to get people involved. There's so much you can do. We just have to be creative. Social media is also key these days. It's a very difficult thing to become big on social media, but it's a very important thing. I think if you want to succeed you have to do that in a good way. Now is the time to explore that part, even though you might just want to go out and headbang, you know?