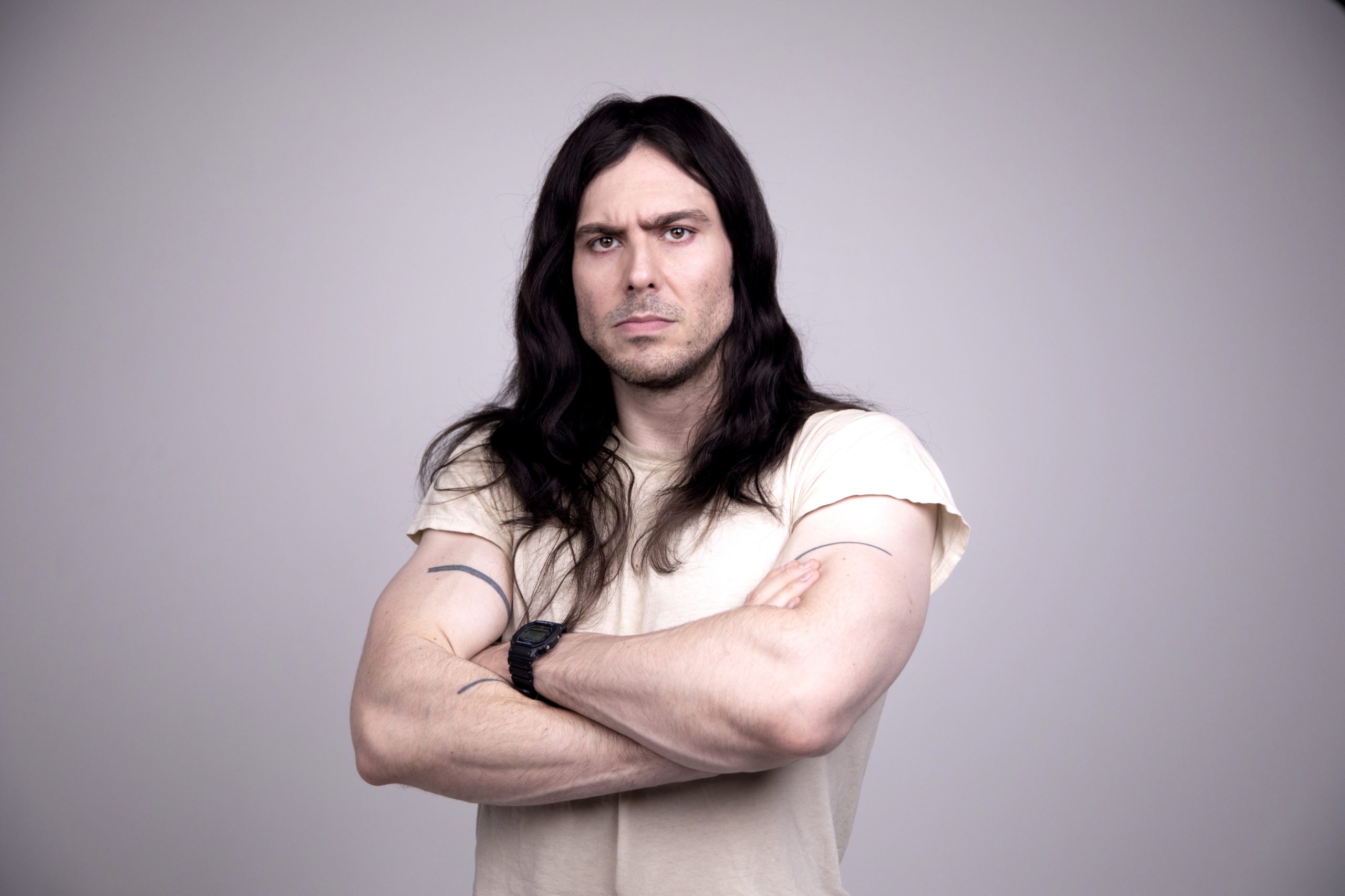 A puzzle wrapped in an enigma wrapped in a stained white t-shirt, Andrew W.K. is more than the sum of decades of partying.

If indeed, the man who breathed life into party-metal with timeless anthems "Party Hard", "We Want Fun" and "She is Beautiful" is the God of Partying (his gonzo new album God Is Partying drops September 10th through Napalm Records), he is an enlightened and perhaps conflicted god. More the deeply complex clown then jolted up, head-banging paradox who became a pop culture icon at the turn of the century.

The polarizing proprietor of the knowledge of party caught up with Metal Injection, dissecting his latest and perhaps heaviest album, 20 years of the landmark I Get Wet, Reddit fandom's obsession with his lyrics and more!

Metal Injection: God Is Partying is to me, upon multiple listens, a decidedly more ominous record in parts, with perhaps some of the heaviest riffs and overall feel of your entire career. With a record like You’re Not Alone, which I viewed as incredibly uplifting and motivating, did you find yourself wanting to take a different kind of sonic and thematic journey here on God Is Partying? One that perhaps embraces equal parts chaos and darks as it does lights and euphoric highs??

Andrew W.K: That’s a very appropriate question. I suppose I still get my orders from the Party Gods, and they told me a long time ago to keep my mouth shut when it comes to most things. I'm here to be a representative of energizing joy and the elevation of the human spirit. I don't want to stand in the way of that joy. For the most part, I've learned to keep everything else cleared out from harm’s way, keep it private. I feel like I've been given a sacred opportunity to represent this euphoric feeling of positive party power, a feeling that transcends me and so much of the chaos of life – I don't want to clutter the clarity of this heavenly vision with my own earthly ramblings. I'm trying to build a holy place to celebrate life itself – to get intimately in touch with pure eternity – so that we can bolster our spirits and return to the challenges of life with renewed vigor, optimism, and focus. And then really, really have some fun.

Metal Injection: The COVID-19 pandemic has been, of course, devastating on the artistic community as a whole. Many have found catharsis and healing through the creative process, being able to dive into projects or endeavors they may never have previously had the time to tackle. Personally, as someone who tackles so many aspects of the creative process – from multi-instrumentals to producing, writing, etc. – was immersing yourself in this album freeing? Particularly given the emotional rigors of the past 18 months.

Andrew W.K: You know, it’s intense. I think most of us are beautifully burdened with a conscience and a heart, and so certain pressures cause us deep sorrow and noble concern. Life’s been challenging, for sure. I pray for us all to stay in touch with our humanity and hope that the challenges we face bring out our best, not our worst. It's a test of character. Look inside the mirror, focus on the blur.

Metal Injection: The idea of taking on all instrumentals seems incredibly ambitious and taxing. Did you find that a rewarding process? And, as a side-note, is there a particular area you found yourself particularly immersed in or enjoying? Whether that be synths, drums, guitar, etc?

Andrew W.K: I think all of the recordings have always been recorded one instrument at a time, from what I understand. It’s a matter of stacking. Basic overdubbing. They don’t need a lot of people for that. The engineer, Ted Young, is amazing and he makes it all work. As far as my favorite part of the recording process, it’s always been the piano and keyboard. But I love drums and bass and guitar too. Recording is being in heaven for me. It’s the means and the end.

Metal Injection: I found myself, in my research, diving down a Reddit rabbit hole. Pages upon pages of fan theories and dialogue devoted to dissecting your music. What are your thoughts on the idea of ambiguity within your music? Do you intend, or prefer, for your songs and records to have accessible, and perhaps individual meanings for listeners, or do you try to tell a decisive story in your work?

Andrew W.K: Actually, I’ve never really thought about it that way before. I've generally felt that my stories are for the janitor’s closet – a dirty room used for making other rooms clean. The people I work with all want the same thing, but humans are complex and tend to confound even our best efforts to influence them. I would really like to influence myself, but even that remains difficult. I suppose if a story is being told about anything, I'd say it’s just about partying. A trained fool, a part-time person, a representative of natural inhumanity, a cheerleader for the eternal delusion, a partier version of a human, an amateur being. And also not this stuff. I don’t know.

Metal Injection: If Andrew W.K. is indeed the God of Partying, then this album gives listeners a much more reflective God. Perhaps more Devin Townsend-esque than Beastie Boys or Ramones. Over the course of your career, have you found yourself hungry to evolve as an artist, going down different sonic highways and perhaps moving slightly away from the ‘party anthems’ that you cut your teeth on in the early 2000s?

Andrew W.K: Well, we always wanted to take the power of partying far and wide, often to the people we thought needed it most. That was incorrect, regardless of whether I agree with it or not. Maybe I've been naive. I suppose I'm always trying to convert myself to a more positive party life – but I'm also trying to transfigure myself to be a less person-based person too, but not in a negative way. I want to reach other lower zones, especially zones where it wouldn't be possible to go otherwise. I've attempted to go into a few lion's dens, and have usually made it out relatively unscathed. It's been intense, but at least it’s been something. I’m a very, very lucky person who hasn't always succeeded at meeting the expectations of those I’m bound to. But it’s a long-term situation, for better or worse. And I’m committed.

Metal Injection: 2021 marks the 20th anniversary of I Get Wet, a record that launched you into the stratosphere of not only rock music, but made you a pop-culture figure. Reflecting on that period of your life and career, how do you view the record, and that era, with two decades of hindsight? Do you look back on the record fondly?

Andrew W.K: Who knows. I can barely remember anything about what I was even doing in my life at that time. But I mean, I love that record, I always did. But just because it launched this whole thing doesn’t mean that I can reflect on it. Mirrors don’t work that way for me. It's bewildering, and sometimes draining, but I haven't always mid-handled it. I wish there was an easy way to avoid this stuff. But it seems like it goes with the territory of being an entertainer. Show business is tricky. You have to accept that not everyone is going to believe in you. You have to accept that some people will actively believe you don’t exist. Most of all, you have to accept that people will say all sorts of things about you and your work, including negative gossip, and there's not much you can do about it. There will be misunderstandings and distortions and outright lies. It's largely beyond your control – just like a lot of daily life – but you have to make peace with the chaotic aspects and in turn, take control of what you can.

Metal Injection: When I think of Andrew W.K. the artist and entertainer, above all, I think of someone who gives his all, his mind, body and soul, to the live performance. After the shuttering of the touring music industry, how energized are you to return to the stage? What does it mean to you on an emotional level?

Andrew W.K: It means a sort of enjoyable kind of pain. I wish it was easy. But I don’t wish it wasn’t hard. I mean, I accept that it’s challenging. That’s why it’s called partying hard. It means taking a cold hard look at the solid cube, and coming to realize how far we still have to go to get into and out of there. Maybe it's impossible. Maybe it's immature idealism. Either way, I try to maintain my determination to do what I promised and spread partying, despite all the messed-up parts of the situation. We must never ever stop partying. Never.

In this article: andrew w.k.