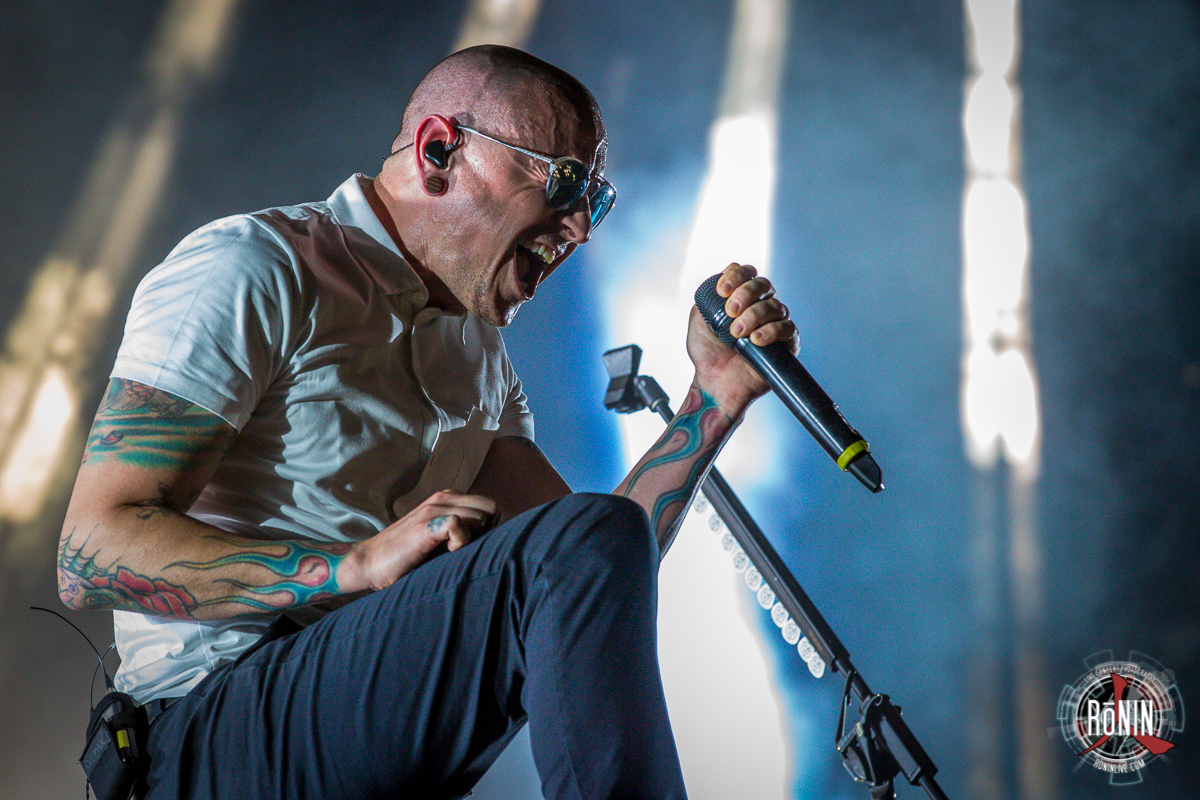 Ever since Chester Bennington’s death, a funny thing has been happening with the back catalog of Linkin Park. Much like Kurt Cobain before him, people have been pouring over the more somber sides of records like Hybrid Theory and Meteora to see hints of Chester’s pain and how he was suffering from the moment he started performing. But that’s not how you should be remembered. Chester isn’t defined by how he directed his pain at himself; it’s about how he channeled his pain in a way that would help his fans deal with their own feeling of loneliness in depression. So let’s take a look underneath the hood and see what made Linkin Park’s music have that fragile beauty.

It’s probably as good a place as any to start at Hybrid Theory, considering the massive amount of fans that jumped on the rap-rock bandwagon because of this album. Going through every one of these songs, you can hear that Chester definitely had some demons inside him, from talking about the pressures of relationships on “Pushing Me Away” or giving way to one of his greatest ever screams on “Place For My Head.” Although time has not been all that kind to all the tracks (just look at the memeification of “Crawling”), there’s still a lot to take from these cuts, with “Papercut” being the perfect thesis statement for how much Chester and Mike Shinoda had bottled up inside.

That was only the beginning though…Meteora is where the real depth comes in. Across just 12 tracks, you can feel both Mike and Chester getting a lot more introspective. Even though half of this record was made on the fly while on the road, you can practically hear them combing through their psyches on tracks like “Somewhere I Belong” and “Lying From You.” For as much as people liked to dog on them for being dark and depressing, there’s even flickers of optimism on songs like “Faint,” which sounds like they’re singing to their fans directly about sticking together through all of the tough times.

It’s not just on a lyrical front either. Out of all the guitarists in metal, Brad Delson doesn’t get nearly the amount of credit that he deserves for what he adds to the band. Sure, he’s no Hanneman behind the six-string or anything, but these first two records show just how much he can do with just a few little sounds. Take a song like “Easier to Run” for example. The chords are pretty standard in the chorus, and yet the one thing that brings you in are those little harmonics that he plays at the beginning of the song. Compared to the crunch that you’re used to from the rest of Linkin Park’s catalog, this is the kind of gentle soundscape that would work just as well on a New Age album.

If we’re talking fragile beauty, it doesn’t get any better than “Breaking the Habit.” Although fans were lining up left and right to call this a premonition of Chester’s demise, it’s still one of the greatest signs of hope in the band’s body of work. Just a few years after talking about wounds that wouldn’t heal, this is where we see Chester finally reaching for some sense of stability, as if he’s finding a way out of the darkness.

Then again, this is metal…and metal is not supposed to be all soft and nice (unless maybe if you’re setting up mood in an Opeth track or something). And this is where the era of Linkin Park’s career starts to get a little spotty. Despite people calling them sellouts for switching up their sound on records like A Thousand Suns or Minutes to Midnight, they never let the change in sound get in the way of their core message. As much as something like “Given Up” is just unbridled frustration from beginning to end, something like “Leave Out All the Rest” does still feel like it’s coming from a genuine place.

Hell, even the non-metal aspects of the group made everything feel a bit more surreal. Yeah…it’s time that we all give our proper respect to Mr. Hahn. Even though the DJ role in nu metal bands became a bit of a punchline, Joe Hahn actually manages to make a lot of his tracks work alongside the more heartfelt lyrics. A lot of people forget that his scratch track “Session” was one of the first Linkin Park cuts to actually win a Grammy…and rightfully so. Without any lyrics, Hahn intercuts different beats and string arrangements to make a song that feels both sad and weirdly comforting all at the same time.

By the time they got to A Thousand Suns, Hahn really started to step up his game, putting different audio effects alongside Chester’s vocals to make everything sound like it’s floating on air. For as much as it sounds like the furthest thing from metal in some spots, “Waiting For The End” may still be one of the greatest Linkin Park tracks ever made, going from slow and brooding in Chester’s register to one of the greatest builds in rock history once the electronics kick in. Though it was much more robotic at this stage, it’s not like their lyrical style had gone anywhere either. As contentious as a song like “The Messenger” is amongst fans, a line like “remember you’re loved and you always will be” is going to speak to anyone who struggles with their internal sense of self.

Even during the times when people were jumping off the bandwagon on albums like Living Things, the same dudes that we got to know back on Hybrid Theory were still hidden in there, with songs like “Roads Untraveled” sounding like you’ve seen the ghost of a long lost friend coming to speak to you in the afterlife. This is also where you get to see Chester’s dejected side rear its head though, with songs like “Castle of Glass” hinting at how fleeting he thinks that his life may be. As much as that castle might be standing tall, Chester’s still looking at himself as the crack in the foundation. No matter which way you slice it, he saw himself as the flaw in the perfection in front of him.

For any of the dyed-in-the-wool Linkin Park fans, The Hunting Party probably has the least offerings of that fragile beauty turning up. Not that it’s bad by any stretch (hell, this might be the highlight of their entire 2010’s work). It’s just that Chester’s passionate lyrics feel like they’re directed outward instead of inward this time around. Throughout cuts like “Keys to the Kingdom,” he’s clearly going for the more frustrated approach than talking about his pain. Whereas the first handful of albums may have been about running away from toxic situations, this is Chester all grown up and going back to confront his past and taking no prisoners. Still, songs like “Mark the Graves” and “Final Masquerade” do manage to have that sting to them. As much as Chester might not want to revisit his past, he at least has some sense of nostalgia and maybe even a few regrets for not being able to do everything that he could. It’s just a shame that it didn’t translate to the final release.

Across One More Light, you could tell that something was off in the Linkin Park camp, and it wasn’t just the music. While the songs themselves sounded like the by-the-numbers pop music that you were hearing all over the radio, the lyrics of songs like “Nobody Can Save Me” really showed how vulnerable Chester was at this stage. By the time that we actually peeled back the layers and figured out what was going on, Chester was gone, having committed suicide in July of 2017.

But this is not meant to be about Linkin Park coming to its most bitter conclusion. If there’s any saving grace to come from One More Light, it would have to be the title track. Even though Mike tended to do most of the heavy lifting on this track from a lyrical point of view, hearing Chester sing these words about never giving up even when people are at their most vulnerable can make even fairweather fans a little teary-eyed. Say what you want to about how Linkin Park were sellouts and how they followed trends, but this is still one of the most beautiful songs that they had ever written. Even when Chester may have been falling apart at the seams emotionally, to hear him sing lyrics like this about clinging onto any life we have left shows you the person we were working with. No matter what demons he was grappling with in his own mind, Chester always managed to keep his heart in the right place.

So looking back through everything, how exactly does Linkin Park hold up with this? Even for the nostalgia trip that it might have been to revisit the different sections of their back catalog, you can still tell that they wanted to use their music to help people at the end of the day. As much as your mom might have called this just angry boys singing about angry things and how it’s corrupting the youth or whatever, this is the kind of dark music that actually manages to make you feel better for having listened to it.

And that’s what happens in every great form of dour music. Every metalhead doesn’t necessarily have to listen to someone like Johnny Cash to get their fix of dark stuff, but you better believe that they understand that Mr. Cash definitely recognizes the same darkness that we are faced with every day.

In a way, Linkin Park is the ultimate example of how to do heavy correctly. For as many times as you can just throw on a Metallica record or a Slayer record, the unbridled energy behind Linkin Park is a lot more poignant than you might think when you break it down. Granted, it doesn’t hold back anything (one listen to Chester’s scream will tell you that), but it’s not meant for you to just wallow in your pain for the rest of your life.

These are the kind of positive songs that trick you into thinking that they’re negative. Chester knew that what he was singing about was screwed up, but something in the tone of his voice made you feel like everything was going to be alright at the end of the day. No matter how heavy things may get in our lives, songs like “Breaking the Habit” are proof that you don’t have to be carrying that guilt and regret for the rest of your life. We can move on…we can get better…and it all starts once you put on the headphones. It’s brooding, it’s depressing, and you could argue that it’s a touch melodramatic in places, but no one can deny that it’s real. Now that Chester is long with us to share this music, we should do right by him and use his music to change the world around us.