PANTERA's <em>Vulgar Display Of Power</em> Has Its Own Beer Now
Hotdogs of the Universe.

Back in May 2014, we had posted about Gwar trying to get its bar open to the public… and after the group met the fundraising goal for it, here we are! The GwarBar is open and serves as an awesome testament to the late David Brockie, as well as a testament to people's will to eat at a place run by a band that shoots blood and guts all over people! Hell of a name too, but when you've got an opportunity to make stuff rhyme you damn well better take it.

The food sounds pretty good, considering the press release for the establishment lists two awesome entrees titled "Scumdogs," which are house-made sausages, and "McDuckets," which are a duck, chicken, cheese and truffle nugget sure to get the band sued, among a bunch of other awesome stuff!

"The GWARbar makes real the longtime fantasy of GWAR, the most brutal rock band in history, to open a restaurant and bar worthy of their name. The project was spurred by Jonathan Staples of James River Distillery and their departed lead singer, Dave Brockie. Along with restaurant partner Travis Croxton of Rappahannock, GWARbar's mission is to bring "intergalactic junk food" to citizens of Richmond, Virginia and visiting GWAR fans from around the universe. The restaurant's ambience balances beauty and brutality in the band's trademark style, brought to life with the design and construction genius of Barry Griffin at Griffin Customs.

Patrons of GWARbar will enjoy sipping signature drinks out of a specially designed GWAR Tiki mug. Founder and owner, Holden Westland of Southern California's Tiki Farm, the world's largest manufacturer of Tiki mugs, has worked with GWAR to create a Tiki based on the band's characteristic visual style. This GWAR Tiki will be highly collectible, and is available exclusively at the GWARbar."

So… who is going to be driving me down there? 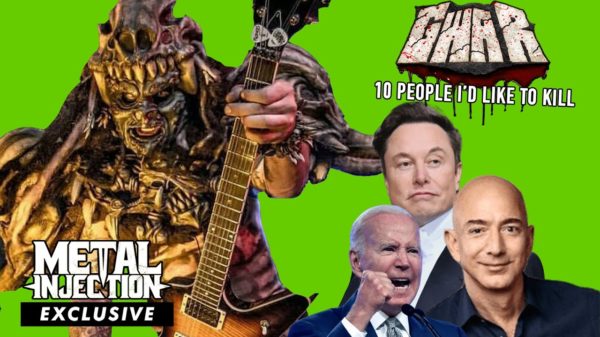 Pustulus Maximus of Gwar discusses the 10 people he'd like to kill the most right now! Follow along as Pustulus goes down an angry...