Finland's mighty Abhorrence is in the midst of a comeback of sorts. It has been quite some time since the band recorded and released new music. Their last new material came out in 1991, their self-titled EP. The Helsinki giants quickly built a ravenous following their self-titled EP and the previous Vulgar Necrolatry demo, both of which are staples in Finnish death metal.

The wait for new Abhorrence finally draws to a close, however. The band is releasing a brand new EP this September entitled Megalohydrothalassophobic. Decibel premiered a track from the EP back in June, which is available here. Today we're fortunate to have a brand new offering from the underground legends as well.

"Hyperobject Beneath the Waves" is the penultimate track from the EP. The term hyperobject relates to philosopher Timothy Morton's idea of items that are so massive in their distribution across time and space they transcend spatiotemporal specificity. An example of this includes climate change. Morton described in his 2011 Sublime Objects that "…hyperobjects not only become visible during an age of ecological crisis but alert humans to the ecological dilemmas defining the age in which they live."

A sinister notion in itself, but in addition to the Lovecraftian horror Abhorrence chases and the malefic death metal found in their new track, this all coalesces into a very dark moment on the EP. The song features an almost constant mid-tempo stomp occasionally lifting for blazing drum rolls or complex string arrangements. Holistically speaking, it shows that even in the absence of new music, the immense talent behind the music can come back and not miss a beat.

The band issued a statement to Metal Injection saying, "'Hyperobject Beneath the Waves' displays a very different side of the upcoming EP than the first one. It is a brutal and dark track, where the lyrics get under your skin." Check out an exclusive stream of the track now and preorder Megalohydrothalassophobic from Svart Records now.

In this article: Abhorrence 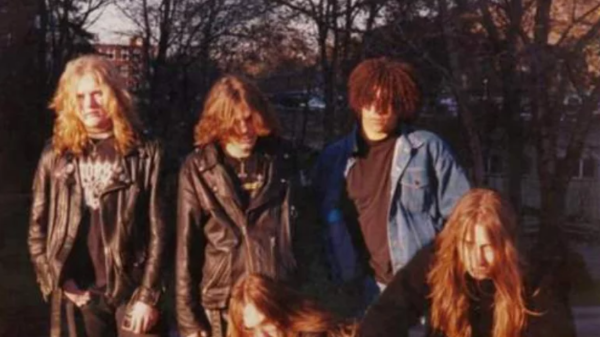 Can you handle the "Carnage"?