Ov Sulfur has been making headlines for two things – their music and really fun stories about them. This one falls squarely into the latter. Ov Sulfur has taken to Instagram to show off a band-themed birthday party for their smallest fan, six-year old Greyson. The party included everything from Ov Sulfur logo cookies to a cake with the band's photo on it, though the most important part is that it looks like everyone had a blast!

We caught up with Greyson's mom Liz for a little more insight into how the very specifically-themed birthday party came to be.

"It's almost a like a family affair," she said in an email. "My two boys listen to everything that me and my husband Chris listen to, but for some reason our youngest Greyson really latched onto Ov Sulfur. Their most recent Las Vegas show will likely be the first show he came to that he'll remember for the rest of his life, which is super cool. He got a shirt, patch and sticker!

"The first thing he asked for his birthday this year was an Ov Sulfur cake; our mouths were stained black for days thanks to the photo printed on the cake. Our friend made the cookies and wasn't sure she could do the level of detail in the logo, but we think she did a good job! As an aside, his favorite song is 'Bathe in the Flame,' even though he only knows half the lyrics and makes up the rest of them."

"Greyson and my boy August are best friends, and Greyson thinks it's pretty cool that August was in our music video for 'Wide Open.' They run around wearing Ov Sulfur shirts. His dad Chris is a good friend, too, and he actually helped me construct vans in our bunk recently for our upcoming tour. Liz watched my daughter while we were doing that.

"Greyson has the cake photo hung up as a 'poster' beside his bed, and he showed Lydia that it's her dad. She got excited, and when it was time for her to go to bed they tucked her in with the photo. It's way cuter stuff than you'd think of if you heard our music or saw pictures of us haha!"

In this article: Ov Sulfur 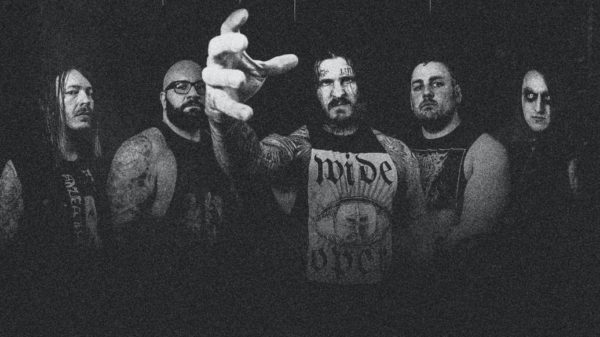