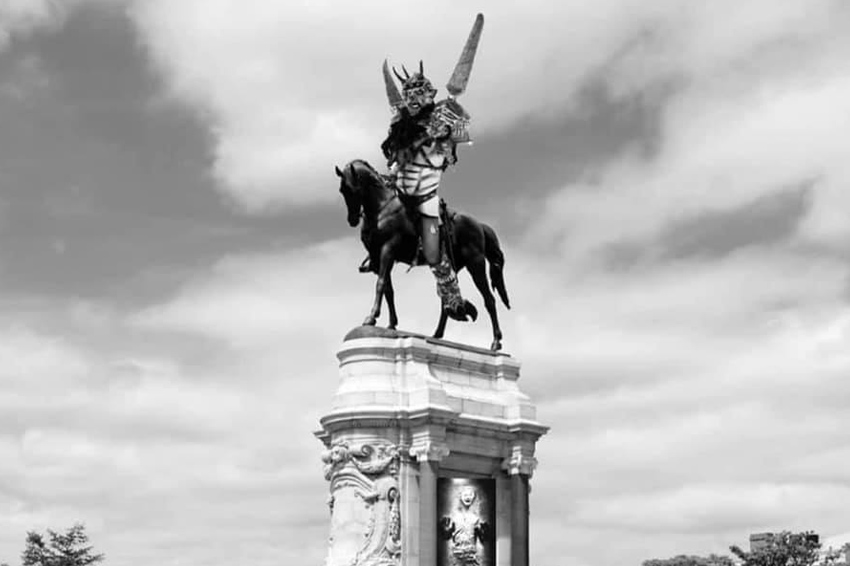 With the ongoing conversation happening in the country right now, and all over the world, there are many questions being asked about statues of historical figures with racist pasts being taken down. And not just in the States. In Belgium, a statue of King Leopold II was taken down based on accusations of colonial atrocities in the Congo. In England, protesters toppled a statue of 17th-century slave trader Edward Colston and threw it in the river. In Richmond, VA as protesters try to take down a statue of Confederacy leader Robert E. Lee, a new idea has arisen on what can replace him – a statue of GWAR's Oderus Urungus.

It started yesterday, when the human form of Slymenstra Hymen posted this excellent image on her socials envisioning the "Robert E. Lee statue in Richmond, Virginia removed, replaced with Oderus Urungus of GWAR"

Earlier this morning, we got a message from a concerned GWAR scumdog that tells us they have decided to take action and launch a petiton to get this in front of the eyes of policy makers in Richmond, Virgina.

The petition reads "Robert E. Lee is a failed war general that supported a racist cause. For too long, the city of Richmond has been displaying statues of him and other loser civil war veterans.

"We the scumdogs of the universe call on the city of Richmond to erect a statue of great local leader Oderus Urungus in its place. While Oderus comes from the planet Scumdogia, he called Richmond his home, working with the local art community and employing local artists and ladies of the night. "

As of this writing, the petition has less than 100 signatures, so let's change that.

While the petition seems like a bit of a goof, it also includes a link to a fundraiser for Richmond COVID-19 Arts and Culture Relief Fund, although we don't think the fund has any affiliation with the petition.

It should be noted that the city of Richmond is currently battling if the Lee statue could even be removed, with a judge granting a local resident a 10 day injuction to prevent its removal, who claims there would be '"irreparable harm" to the statue if it is removed.'