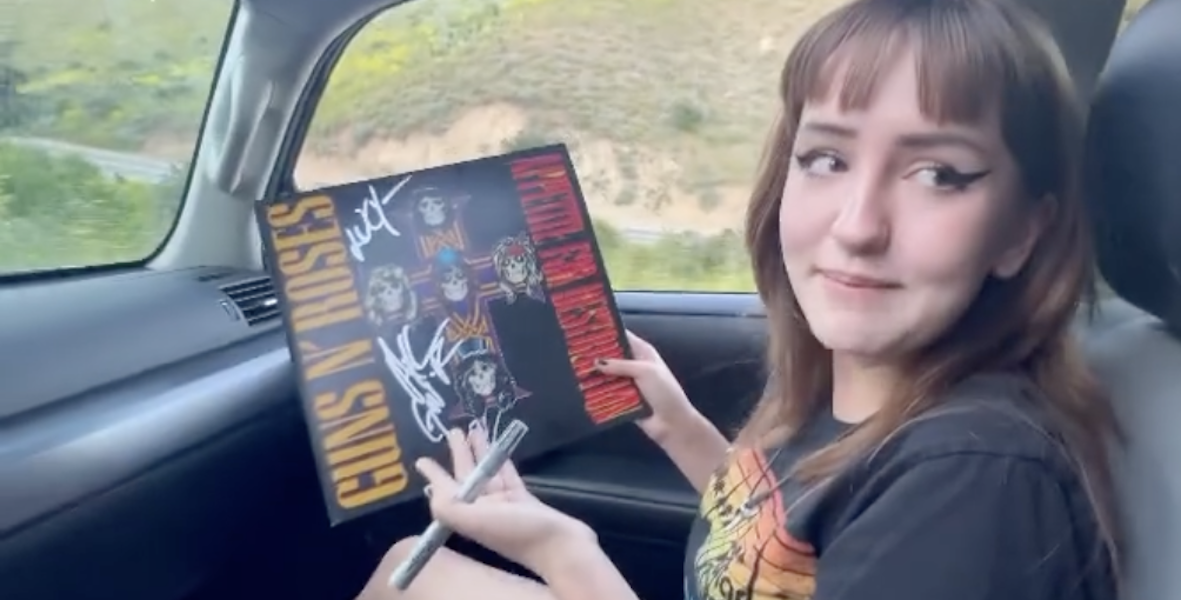 If you've ever had the chance to meet a musician that you admire, there's one thing I think can be agreed upon about such encounters: they happen fast, and you need a lot of luck.

Such was the case of Guns N' Roses super-fan and Southern Californian, Lucie Johnson, who while out on the windswept roads of Malibu one day, noticed a familiar face out for a casual walk: W. Axl Rose.

Lucie, an aspiring actress and musician, took to her Instagram account writing, "Can't believe what happened tonight! Cross this off the bucket list. So… I met Axl Rose of one of my favorite bands Guns N' Roses tonight! We spoke briefly about music, and he gave me a hug and it all just happened so fast. Still can't believe it. Signed my album cover. Was freakin' awesome. I'm obsessed with them and have been working on the guitar solos and have been playing their album 24/7."

Indeed, the post features pictures of Lucie and what appears to be Rose. In the photos, Axl seems to be getting a kick out of the whole thing, probably wondering the same thing as we are: Why is this person riding around with a vinyl copy of Appetite? That's a commitment, right there. Maybe she's on her way back from her guitar lessons? She mentions having picked the record up at the Amoeba Records in Hollywood. We spoke earlier about needing luck on your side — maybe she was just on her way home from the record shop, and wham-o, there's Axl.

Or maybe, she saw Axl, drove back home really quick, grabbed the record, then jet back and bum-rushed him along the side of the road. I did that once to Chuck D. of Public Enemy—in a record store, conveniently. He would have graciously signed the Misfits box set had I asked him to. I did the same thing to Jane's Addiction drummer Stephen Perkins in a TGI Fridays. I was not invited to sit down but I did get a pair of his signature drumsticks.

By the way, if you're wondering how Ms. Johnson was so clearly in the right place at the right time, it's because Axl reportedly still lives in that mansion from the "Estranged" video, somewhere deep in the hills of Malibu. Let this be a reminder, fans: musicians need to stretch their legs now and again, too. Be there in the moment, and you never know — you could meet your idol, just like Lucie did!