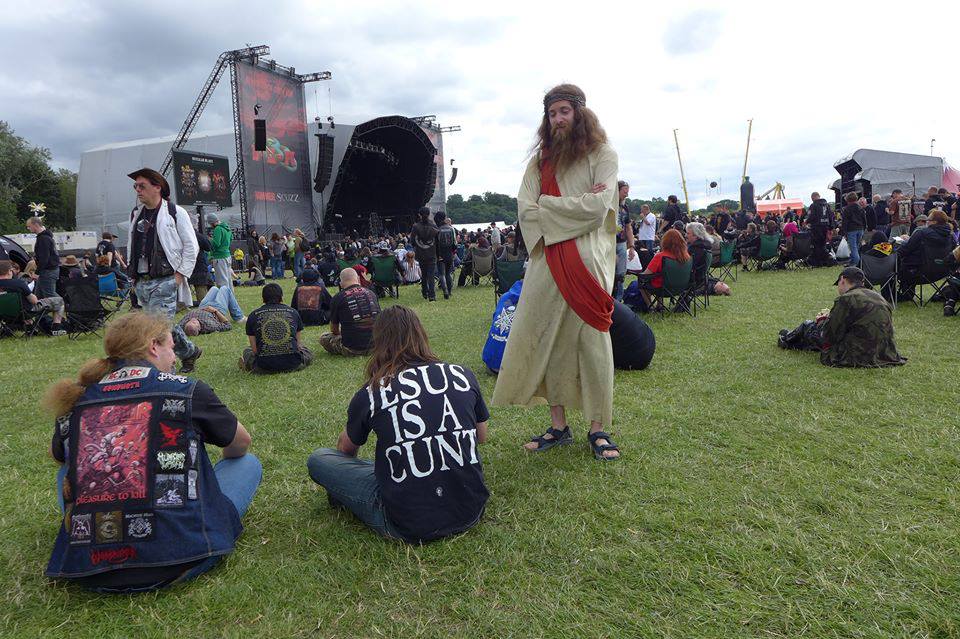 Cradle Of Filth's infamous "Jesus Is A Cunt" might be more famous than the band themselves. The band is celebrating 30 years and reached out to fans on Facebook asking them to share their stories about how they got in trouble for wearing the shirt.

"Banned in New Zealand!" Cradle of Filth writes. " Some of you also appeared in court for wearing it…Tell us your own stories about the notorious "Jesus…" shirt! "

Here are some of our favorite responses.

It was the cause of a minister being kicked out of an IHOP in Virginia Beach. I was wearing it in the IHOP, didn't realize it was shortly after church services let out. The minister was at a table with part of his flock, and spotted me. He said something to the effect of "you will accept Jesus as your lord and savior!!!" I calmly replied "no, I won't." The minister went to the manager to complain about me. To the manager's credit, he said that I have a right to my opinion due to 1st amendment rights. The minister started arguing with the manager, which got him kicked out. My girlfriend and I continued to enjoy our breakfast.

I was suspended in school for wearing it! My dad took it away and gave it back to me when I was 21! Little did he know, I'd continue wearing it

"A friend in high school was suspended for his "Jesus is a ct" shirt. To be fair, he originally was sent home to change, but challenged the principal about if he would be sent home if [the shirt] said "Satan was a ct".
Argued himself into suspension. The guy was a legend to us goth/metal kids for the next two years."

A policeman once told my (female) friend to take the shirt off and when she refused said one of our male housemates would get drunk and rape her.

Reading all these stories, it's making me thankful to live in North East America. I used to wear this shirt all the time and the worst I got was dirty looks. Food shopping, concerts, just out and about. The best thing that happened was wearing it to Ozzfest, having the band sign it and Dani saying he never thought he'd see it in America.

A lady at Walmart threatened to call the cops on my friend for obscenity. He said " be my guest, the obscenity is on the shirt, so they will come arrest my shirt?" . She just muttered to herself and walked away lmao.

I used to wear it all the time around the super conservative tiny town midwest, and a lot of people would get pissed, some to the point of wanting to fight. And every time they would want to square up I would look at them and say " You know who wouldn't kick my ass for wearing this shirt? Jesus."

Read all the responses here. We talked to Dani about the shirt's origins in 2019 for a video interview. Watch it below.