CD Review: CARNIFEX Until I Feel Nothing

I’ve seen Carnifex live a couple of times, first at Summer Slaughter in 2010, and again this past spring at New England Metal and Hardcore. The first time left me relatively unimpressed, but their performance in Worcester made me have a slight change of heart. While the music itself seemed just as generic as it was the first time, Carnifex seemed to have tripled their charisma and stage presence. That and I couldn’t help but feel exhilarated during Lie to My Face when the whole crowd shouted: “What the Fuck?!” So I thought: “Well, maybe these guys are a band worth watching.” I thought perhaps they would make a Job for a Cowboy-style move and become more of a straightforward death metal act (though I admit with no shame that I still un-ironically love Doom).

Unfortunately, on Until I Feel Nothing, Carnifex fail to meet those expectations. I will be fair and grant that the album is a cohesive and listenable product. But even as generic products go, this one fails to really impress the consumer. Indeed, they have added some melodic-death metal riffs and into their sound, along with more high-end screaming than before. But their execution is such that, rather than sound like replica of early JFAC and Suicide Silence, they sound like one of early-Black Dahlia Murder instead. While I am a big fan of BDM…this is supposed to be a Carnifex record. I realize the “I’ve heard this before” complaint is kind of frivolous, as emulation in music is unavoidable, but on Until I Feel Nothing, I don’t think Carnifex tries hard enough to carver their own identity.

Sonically, the album is very crisp and well produced. But the guitars seem to lack the meaty and robust texture they had on the band’s previous album, Hell Chose Me. What you’re left with here is a hollowed out crunch that sounds ok during some of the harmonies, but is not very satisfying elsewhere, especially during the breakdowns. And while I admire Scott Lewis as a performer, I think his vocals were much stronger on the band’s earlier work. His low guttural voice is much stronger and grabs more attention than his mid-to-high range vocals, and he doesn’t seem to utilize this asset as much as he should.

To its credit, Until I Feel Nothing does have an upward curve, starting around songs like Creation Defaced and the title track. One part I particularly liked on Creation Defaced was at the 1:55 mark when a piano plays in the airy foreground, while a guitar-driven breakdown chugs quietly in the background. On Until I Feel Nothing, the band takes the Gothenburg-style riffs and manages to put them together in a way much more engaging than on the first half of the album.

Today’s prevailing “true-metal” orthodoxy holds that deathcore is universally “bad” and beyond any fair consideration. While I find this self-restricting nonsense to be pretty childish and silly, I cannot be an honest reviewer and deny how generic this record is. Despite giving it their best shot, I really think that Carnifex is better suited to a more dissonant death-metal style, rather than the more melodic outfit they try on here. I’m sure it will produce enough pile-ups and spin-kicks to keep the live crowds riveted, and I would be happy to join in. But despite its strengths as an aggressive and respectable offering, it’s not nearly as fun and entertaining as Dead in My Arms and Hell Chose me.

Favorite Songs: Dead But Dreaming, Creation Defaced, Until I Feel Nothing, Wretched Entropy

In this article: carnifex, deathcore, until I feel nothing 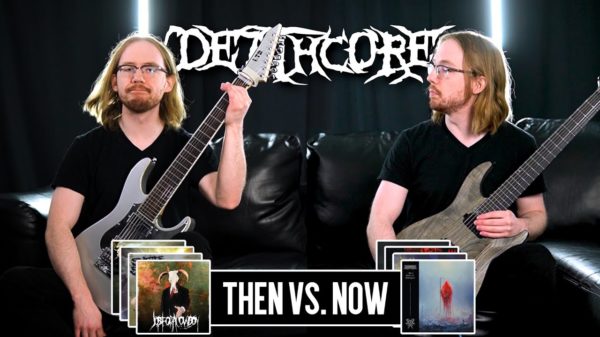