I don’t know about you, but this time of year always makes me want to drink beer, crank metal, and take my shirt off at football games. Or, if those options aren’t available (or frowned upon by neighbors), I'll drive a pick-up truck at night down some country lane with multi-colored leaves scattered everywhere.

Given this state-of-mind, myself and the Metal Injection editors were thinking that this Halloween season could do with a certain list. Namely, the “10 Most Metal Horror Movie Villains” in history. You can probably guess three or four already. Hey, there’s something to be said about being staid, plus it’s a simple fact that some of the most recognizable horror villains are that way because they rule.

But I doubt you’ll see ‘em all coming. A couple might even creep right up beside you and give you a major wet willie.

Put this one down in the obvious column. Ever since first appearing in Wes Craven’s 1984 masterpiece A Nightmare on Elm Street, the fedora-wearing child murderer with razor blade fingers has haunted the dreams of millions of teens and many more adults who won’t admit it. Despite looking like an overcooked Jimmy Durante, Krueger (the one played by Robert Englund, not the travesty portrayed by Jackie Earle Haley) has perpetrated some of the most ingenious kills ever captured on screen. For example, here, here, and here. As personal aside, Krueger gets extra kudos thanks to Memphis’s Continental Wrestling Association, who decided to put Doug Gilbert in a Freddy mask and have him wrestle as the great dream killer. Simply beautiful.

Yet another obvious one, but no less awesome. As all good horror dorks know, Jason doesn’t factor into the Friday the 13th franchise until numero dos, and even then he doesn’t get his trademark goalie mask until the third installment. Frankly, none of it really matters. The only thing you really need to know is that Jason kills a lot and, like Count Dracula, he dies but always comes back. His kills tend to be quite crafty, too. Again, please consult here if you need examples. My particular favorite in the franchise is Friday the 13th Part III because Jason kills both hippies and punks. Better yet, he whacks that annoying and fat neb Shelly (played by Larry Zerner), who is probably the most obnoxious character in the history of horror cinema.

For your listening pleasure: Frightmare, “Friday the 13th”

Are you getting the hang of it yet? Good. The Texas Chainsaw Massacre is a downright revolutionary horror flick that was made on a shoestring budget. Inspired by the crimes of the Wisconsin necrophile and serial killer Ed Gein, director Tobe Hopper assembled a mostly no-name cast and turned them either into victims or members of a cannibal family from south Texas. Towering above them all is the silent Leatherface (played originally by Gunnar Hansen), a cretin occasionally dressed in a butcher’s smock or a two-piece suit. At all times however, Leatherface wears the skin of past victims while swinging around a chainsaw like a child’s toy. It doesn’t get much more metal than that.

A great white shark in human form, Michael Myers manages to straddle the line between a living human psycho and something supernatural. A ghoul in a William Shatner masked spray painted white, Myers began his horror career as young boy who kills his sister on Halloween night. Over a decade later, he escapes from a mental hospital and returns to Haddonfield, Illinois in order to terrorize unsuspecting babysitters on, you guessed it, Halloween. Arguably the first true slasher film, John Carpenter’s Halloween is rightfully considered a classic, and like The Texas Chainsaw Massacre, it somehow managed to gain a reputation for being excessively gory while showing very little red stuff in the actual film. Perception is power, and I perceive that Michael Myers—that wheezing man with the milquetoast face—is one of the most metal movie monsters ever.

For your listening pleasure: The Misfits, “Halloween”

6. The Shark from Jaws

While horror movies tend to make most mainstream critics break out into the Mr. Yuk face, Jaws is one of the rare examples of purposely scary film that appeals to the horror tribe and most average Joes alike. Boasting one of the greatest openings in film history, Jaws retells the very real rash of shark attacks that plagued the New Jersey coast in 1916, but changes the location to a fictional resort community in New England. Instead of a dumb predator who mistakes a bunch of Yankee bellies and legs for poorly coordinated seals, the great white in Jaws is a calculating killer who almost manages to outfox everyone until the bitter end. If he didn’t kill Quint, who’s probably the greatest (fictional) man to ever drink a Narragansett, I’d probably vote for the shark as the eternal Commandant of the Coast Guard.

Confession time: I found it hard to watch Hellraiser all the way through the first time. I can take gore and I can take sadism, but bile and the wet smacks of maggots crawling underneath rotten food is enough to make me upchuck. When I finally worked up the courage to complete Clive Barker’s paean to extreme sexual depravity, I recognized Hellraiser as one of the more visceral and uncomfortable horror films ever made. This is a good thing. Horror should make you queasy and as fidgety as a crackhead stuck in a San Francisco earthquake. The Cenobites—an inter-dimensional race of demons who are so doped up on sensual overload that they can no longer tell the difference between pain and pleasure—make many people uncomfortably bubbly in the guts, and since Pinhead is their leader, we should give him his propers as a very metal villain indeed.

For your listening pleasure: Motörhead, “Hellraiser”

Like Jaws, The Omen enjoys a pretty broad base of support. You can thank Gregory Peck for a lot of this, plus the success of The Exorcist (which came out three years prior) helped this film about the Antichrist to attract a lot of attention. While Linda “I boned Rick James” Blair’s Regan MacNeil goes from cute to terrifying halfway through the film, Harvey Spencer Stephen’s blue-eyed Damien Thorn looks and feels evil almost from the beginning. Even knowing that he’s the son of Satan, viewers still tend to cry out in surprise when his nanny hangs herself for him during a birthday party or when Keith Jennings (played by David Warner) falls afoul of Damien’s bad juju and winds up decapitated.

Debate all you want about which installment in the Alien franchise is best, but for my small amount of money, the Xenomorph queen in Aliens is the raddest thing about the whole shebang. Designed by the Swiss artist H.R. Giger, who also did the artwork for a certain album that you may be familiar with, the Xenomorphs are metal in their own right, but when you give the soul of Lita Ford to an especially large one, then you’re talking major league-level brutality.

For your listening pleasure: Municipal Waste, “The Fatal Feast”

2. The Zombies from Return of the Living Dead

Ah, finally a monkey wrench thrown into the works. This one is uncommon, but it makes perfect sense. Before 1985, zombies were slow, beef-witted corpses who took longer to reach their targets than Sleep takes to make a chord change on Dopesmoker. Written and directed by Dan O’Bannon, who also penned the screenplay for Alien, Return of the Living Dead is a punk rock horror-black comedy film set in the counterculture mecca of…Louisville, Kentucky. While it often borders on the absurd, Return of the Living Dead was the first zombie film to link the shambling dead with a desire to eat brains. Better yet, these fast-moving zombies are downright unkillable, for if you burn them up, then the residue of their chemically-altered dead flesh mixes with the air and creates an acid rain that just makes more zombies. Ultimately, the government decides to nuke the whole city, which makes Return of the Living Dead an encapsulation of 1980s thrash metal in 91 minutes.

Foul-mouthed and defiantly anti-Christian, Pazuzu is more or less your average metalhead. But what makes this ancient Assyrian and Babylonian wind demon so metal is the fact that it possesses little Regan MacNeil and makes her into a hellfire sailor. Known widely as “The Scariest Horror Film Ever Made” (it’s not, but whatever), The Exorcist scared the bellbottomed pants off of an entire generation and drove many back into the awaiting arms of the Catholic Church or the numerous Protestant denominations. Pazuzu not only gave Pantera the phrase “a vulgar display of power”, but also a face so merch-worthy that it’s painful.

For your listening pleasure: Possessed, “The Exorcist” 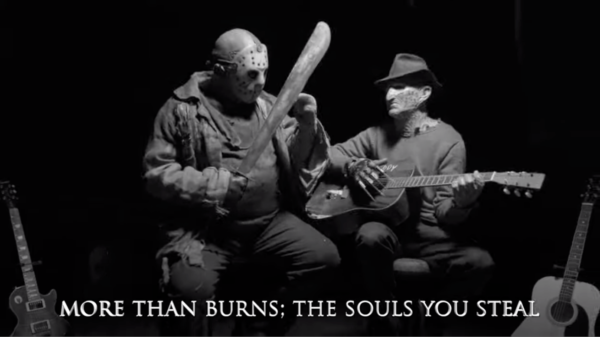 Everybody's favorite horror BFFs, Freddy Krueger and Jason (by way of The Merkins) have released an incredible take on Extreme's "More Than Words," but...